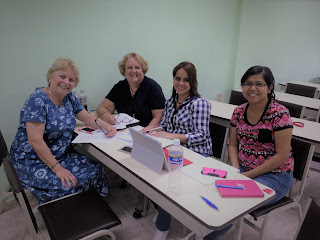 The trip to Honduras with Dr. Kathleen Stone and Dr. Elizabeth Barker was filled with productive meetings and many PR moments. We originally had more plans for our time, but we were in meetings with Aleyda Spetnagel and Rosa Margarita Rodriguez much of the time. Aleyda is the director of the new nursing school and Margarita will be our nursing instructor.

On Tuesday, we had a meeting in the morning with the Director of Hospital del Sur, Dr. Saúl Júarez, to discuss the new Nursing High School and how we can collaborate with the hospital. We also checked on the progress on the lactation project that we have been working on. Dr. Juarez expressed his enthusiasm for the new nursing high school program. He stated that he is willing to help us by allowing our students to do their practical hours in the hospital.

The Lactation project is in collaboration with the company Medela. They donated 5 lactation pumps earlier this year, along with the one donated through Dr. Kathy Stone. Both Dr. Stone and Dr. Barker helped seek funding for the construction of a room to take care of the lactation equipment. Part of the agreement between Medela and the Hospital del Sur was the hiring and training of a nurse who would be the Lactation Coordinator of the Hospital. That will be fulfilled in January when the program will officially begin. We did training last March with the head doctor (Dra. Martha Cano) and a nurse on the Educational committee of the hospital (Lic. Iris Lorena Rodriguez).

The pumps arrived in May, but we have been in the process of collecting baseline data as part of the research involved in this project. The Hospital del Sur data is being compared to data that is being collected in India. In India, they have found that the increase of the amount of milk that a mother produces at 6 months and a year post-birth is directly related to the use of a lactation pump within the first two hours post-partum.

We were excited to see the Lactation room that has been built. There is a refrigerator (eventually, a milk bank will be set up), microwave, sink, and water storage system. We still lack a shelf unit to be built, and we are checking into a water filtration system for the room. All of this was bought with donations.

In the afternoon, we met again with Margarita, the nursing coordinator and instructor for the nursing high school. We discussed the proposed curriculum and schedule for the 3-year program. We met for several hours on Tuesday and Wednesday, adjusting the program (combining some of the courses and rearranging the classes from simple to complex) that we would later propose to the Minister of Education.

We enjoyed the opportunity to meet with the proposed instructors for the new schoo. It seems to be a great group of teachers, who are open to suggestions from us on how to integrate nursing principles and examples into the curriculum of each course.

On Wednesday afternoon, we went to the Sémesur Hospital to meet with a group of nurses and the administration to also talk about the nursing high school. We have already received an agreement with them to use their hospital for part of the practical experience for the nursing students. They are very excited about the program. They requested that we continue to do continuing educational teaching with the annual nursing brigade, and also to involve the nursing school.

On Thursday morning, November 17, almost 100 specially invited guests came to the Hotel Rivera hotel to learn about the new High School Nursing program as presented by the Ministry of Education.

There were around 12 different television stations represented at the gathering, where Gloria Arieta, Laurie Potter (as representative of the mission), Quintin Soriano (the mayor of Choluteca), the Regional Director of Education (Lic Lennin Enrique Burgos Arce), and the Regional Director of Health (Dr. Jose Maria ), and I were interviewed. There was a lot of excitement about the new program.
Paguada

In the afternoon on Thursday, the specialists, such as doctors and nurses, and health care personnel were given an opportunity to ask questions and express their opinions about the program proposal. There was a good dialogue and exchange of ideas.

Then, at 5 PM, Dr. Barker, Kathy Stone, and I met with the Education committee, who had worked on the program, to propose the combination of some of the classes, and a different order of the classes, from simple to complex. We also discussed the proposed idea of a four-year program, with the fourth year being the practical experience. We suggested that the practical experience will be completed at the time of the theory of each class (Pediatrics theory, with Peds clinicals, for example). We also suggested that we offer a specialty nursing year for their fourth year, which would be optional (For example, School nursing or Agroindustrial nursing).


On Friday, November 18th, specialists from all the different curriculum areas came to validate the curriculum. They worked all day on this. Some of the areas were not represented, so the following week, Margarita had to go find help at the Hospital del Sur to complete the validation.

We went to Tegucigalpa in the afternoon and then flew back to the US on Saturday. It was a very positive trip. We were able to complete and contribute to the validation process for the nursing school.

We can't wait to get back to Honduras to get directly involved again. 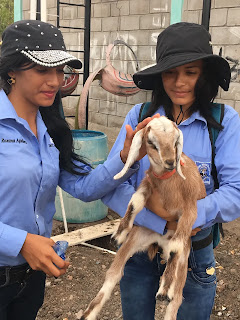 A Time For Reflection 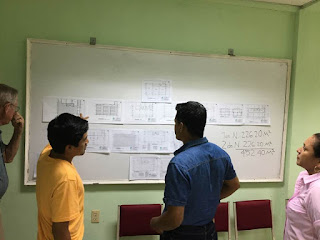